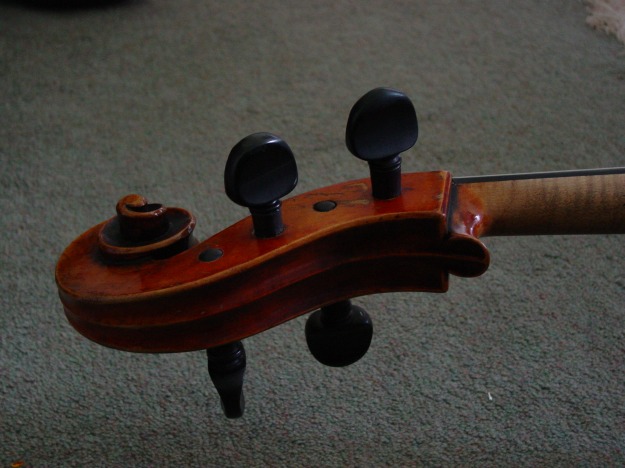 I know I’m a viola player and shouldn’t admit to these things, but for a period of my life (when I was between about 12 and 18) I desperately wanted to become a cellist as I thought they were *the* coolest people on the planet. So I took up cello lessons and was told, ‘You play the cello like a violin!’ by my teachers and any cellists who saw me play, and was warned sharply that playing the cello would ruin my viola/violin playing. So due to time pressure (and the fact that every time I played the cello I got massive blisters on my little finger) I reluctantly put away my cello and focussed on the viola, which I don’t regret (well, maybe a tiny bit!)

So, in my role as a cellist manque, here are some videos I recently discovered by a cellist called Rachael Lander, who was in the NYO at the same time as me. She uses loop pedals to create amazing waves of sound and her own backing tracks which to me is just beyond awesome. Enjoy.

All material posted here is copyright Jessica Wyatt 2010-2015. Please contact me through the links at the top if you wish to use any material or quote my posts. Thank you.

I'm a viola player living in Scotland who likes to write about music, the arts, education, creativity and occasionally other things that take my fancy. I like Bach, cats, photography, Stephen Fry, playing chamber music and walks on the beach. Please feel free to contact me if you have any enquiries about booking a viola player or violin or viola teaching in central Scotland. My website is www.jessicawyatt.com and my email address is jesswyattviola(at)gmail.com.

All About Anxiety
Stephen P Brown
The Passacaglia Test

The provision and purview of classical music

Where Music Teachers Come to Play

For sale in Scotland, UK - handmade violins by Scott Cao from their American and Chinese workshops

The Way of Piano

"... these are a few of my favourite things"

Express yourself. It is later than you think.

The Grown Up Kids

The Right PDF Music - The Right Price - Right Away

A forum for music teachers

music for a better world